Cherenkov Radiation and the "Blue Glow" 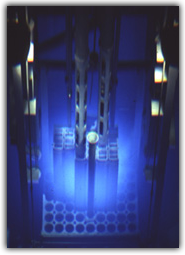 At full power (200 kilowatts), the MSTR core produces approximately 6.4 trillion fissions per second. Each fission event liberates a tremendous amount of energy, a portion of which is carried away by fission products which then decay and produce high-energy beta particles. Often, these beta particles are emitted with such high kinetic energies that their velocities exceed the speed of light (3.0x108 meters per second) in water. When this occurs, photons, seen to the eye as blue light, are emitted and the reactor core "glows" blue.

The intensity of the blue glow is directly proportional to the number of fissions occurring and the reactor power level. This property is utilized in Cerenkov detectors that measure the magnitude of Cerenkov radiation produced in a detector made of lucite. Cerenkov radiation becomes visible in the MSTR core at a power of about 6 kW. At 200 kW the core glows brilliantly with a soft blue glow. The blue glow continues for some time after the reactor has been shut down due to the decay of fission products.

Another explanation of the Cherenkov effect can be found at Wikipedia. The Wikipedia site features the MSTR in its examples to explain the subject.