The Basic Physics Behind a Nuclear Reactor 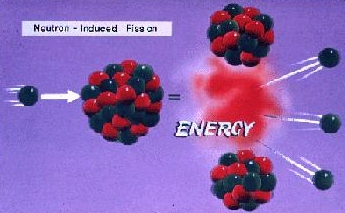 The nuclear reactor operates on the principle of nuclear fission, an event that occurs when an atom is struck by a neutron and flies apart.

The figure at right depicts a neutron heading towards a fissile atom (one that is capable of supporting fission). Most often, this is Uranium-235 or Plutonium-239, where the number after the element name indicates the total number of neutrons and protons present in the nucleus of the atom.

When the high-velocity neutron strikes the nucleus, the atom sheds more neutrons and breaks up into several other particles. The motion of all these particles and atoms flying around and colliding creates the heat that is used in power plants to generate electrcity.‌